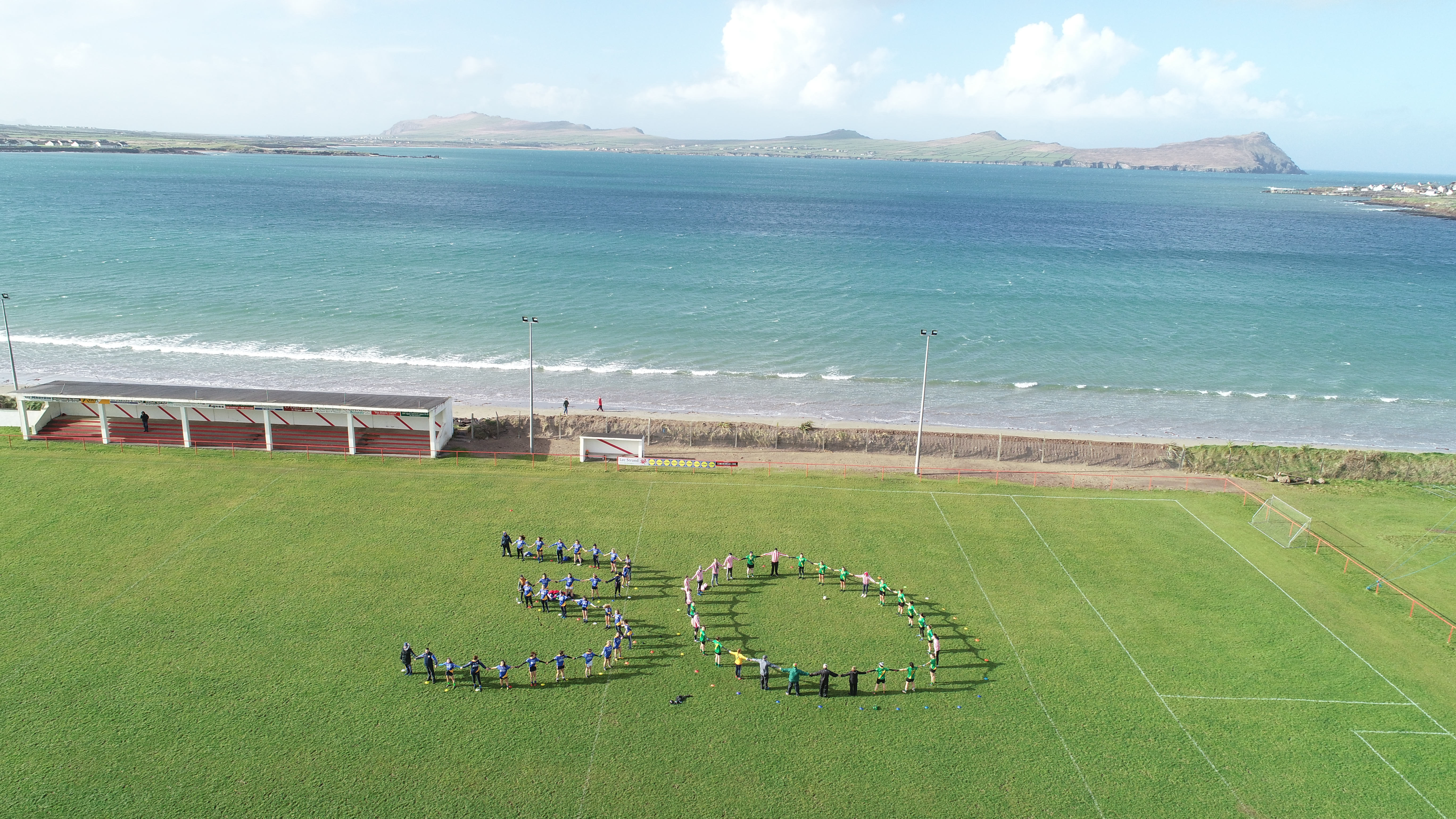 Members of host club An Ghaeltacht were joined by Cavan's Mullahoran Ladies and Dublin's Thpmas Davis Ladies at Gallarus GAA Grounds by Muirreigh Strand in West Kerry to make a human '30' to celebrate the 30th anniversary of LIDL Comrtas Peile Pidi î S. The famed Gaelic football tournament, named after the Kerry GAA great Pidi î S, had 44 teams compete in senior, intermediate and junior adult competitions all over the DIngle Peninsula this weekend.

The Lidl sponsored Comórtas Peile Páidi Ó Sé 2019, the famed Gaelic football festival saw 42 teams coming from 16 counties, England, Scotland and the United Arab Emirates to play in senior, intermediate and junior men’s and ladies competitions all over the Dingle Peninsula this weekend. There were many familiar faces from the GAA including Kerry and Dancing With The Star’s Aidan O’Mahony who was managing Millstreet in the Intermediate men’s competition. Recently retired Cork footballer Donncha O’Connor lined out with Ballydesmond and Cavan All-star player Aishling Sheridan togged for her beloved Mullahoran and it was a truly family affair with three of her sisters playing anbd her mother Monica part of tyhe management.

The weather was mixed with rain mostly on Saturday for the majority of teams but this was followed by glorious sunshine on Sunday on the peninsula and some lovely football was served up and a pleased crowd in attendance for the marquee finals in Gallarus.

Before the senior ladies final, An Ghaeltacht club members of all ages joined Mullahoran and Thomas Davis ladies to create a human ’30’ on the Gallarus GAA pitch which was cpatured by done some 200 feet up in the sky, all to mark the 30th anniversary of the famous Kerry Gael Páidi Ó Sé’s tournament brainwave all those years ago.

Pádraig Óg Ó Sé was proud of how the weekend was ran, “We work hard as a committee for months in advance to ensure a smooth Comórtas. We feel responsible for the well-being and of course enjoyment of upwards of 1,000 people from all parts of the world who descend on the Peninsula and it looks like nobody got injured badly and we got lots of well wishes. It’s a huge promotion for potential future visits by these players and supporters later in life, with familys or whatever. That’s where it really pays off for  businesses locally. It’s all building brand equity for the entire peninsula. My Dad always said to leave them wanting more and I think we have the perfect mix of good football, some craic and socialising which hits the right mark. We are indebted to our sponsors LIDL Ireland, EJMenswear.com, Lee Strand Milk and of course Kerry COunty Council Tourism Unit who allow us to run the tournament. I wish my fellow club members the very best of luck now in hosting the Comórtas Peile Na Gaeltachta in June which will be another fantastic weekend for our club.”

In the senior men’s Dermot Earley Cup final, Dingle lined out with a strong side, having defeated Clare’s Eire Og and Kerry’s Milltown/Castlemaine on route. On the other side of the draw, Portarlington impressed by beating Cork’s Ballydesmond who had former Cork star Donncha O’Connor up front, and then host club An Ghaeltacht in the semi-final.

The senior men’s final was played under dry but gale force weather conditions at An Ghaeltacht’s Gallarus GAA grounds. Portarlington were playing with the wind in the first half but didn’t get the grips with the advantage, notching up three points from Christy Booth, Ronan Coffey and Jack Foster (0-1 f). In Dingle’s few forays up the pitch, they yielded only two points in total from corner forward Luke O’Connoll and centre-forward George Durant leaving the scores at 0-3 to 0-2. The Second half was equally as cagey with both sides finding it hard to come to terms with the wind.  Jack Slevin for Portarlington was keeping things tight at the back but the intense pressure began to yield cracks with 15 minutes to go as Dingle started to pull away, picking off a few lovely long-range points from Brian O’Connor, Gavin Hickey Brosnan and George Durant (a 45).

Last year’s winners Ballyboden St Enda’s suffered a surprise defeat at the hands of Templeport St Aidan’s of Cavan 3-7 to 3-12. On the other hand, newcomers to the Comortas, Thomas Davis had a narrow victory over Louisburgh of Mayo, 3-8 to 3-5 before beating a fancied Newbridge Sarsfield’s in the semi-final on a scoreline of 2-3 to 0-3. On the other side, Cavan’s Mullahoran accounted for Leitrim’s St. Joseph’s and fellow county club side Templort St. Aidan’s to tee up a Dublin v Cavan final.

Cavan county star Aishling Sheridan stood out with a personal tally of 1-4 and she was joined on the team by her three Mona, Geraldine and Louise.  Sheila Reilly also performing brilliantly at left half back. Dublin’s Thomas Davis, despite county star Orla McGuigan’s best efforts, were no match for Mullahoran who boast five Cavan county first 15 players. The final score was 3-11 to 1-5

Annascaul acquitted Golden Kilfeacle of Tipperary 4-14 to 0-3 which got them to meet Tubber of Offaly in the semi-final.  A high scoring game yielded an Annascaul the win (5-16 to 4-13), getting them straight through to the final. On the other side, Kerry’s Lispole beat Armagh’s Ballyhegan Davitts (1-10 to 0-7) while Dunmore MacHales of Galway beat Millstreet, managed by former Kerry star Aidan O’Mahoney on a scoreline of 2-9 to 1-7. In that semi-final, Lispole played Galways Dunmore at home but the Galway lads raced ahead 3 points to no score within 10 minutes. Lispole matched them point for point for the remining 50 minutes but Dunmore kept their early lead, finishing up on a scoreline of Dunmore 0-9 Lispole 0-5.

So, Kerry’s Annascaul ended up playing against Galway’s Dunmore MacHales who were always chasing the game (0-6 to 0-1 at half time). Although the Galway men converted a 20 yard free into the roof of the net with ten minutes to go which took them to three behind, 1-8 to 1-5 and Annascaul’s Sean O’Hara got a straight red card just after that, the local side held out for the final minutes and won on a scoreline of 1-10 to 1-6.

In other competitions, there were wins for Mid-Kerry side Cromane in the Junior Men’s final led upfront by former Kerry star Sean O’Sullivan, beating Renard 3-8 to 1-8. Edinburgh’s Dunedin Connolly’s beat Cavan’s Belturbet in the Intermediate Ladies cup, Ballyboden B team defeated Tir Chonaill Gaels of London in the Junior A Ladies cup and Kingdom Kerry Gaels beat Clonaslee St. Manman’s in the Junior Ladies B Shield.

In this round robin competition, Austin Stacks lost to Longford’s Ballymore and Dunedin Connolly’s of Edinburgh. In the other group, Corca Dhuibhne started well, beating Blessington of Wicklow side by 2 points, 5-5 to Corca Dhuibhne 3-13 (22) but they lost out to Cavan’s Belturbet 1-8 to 3-4 in the semi-final. Dunedin Connolly’s of Edinburgh were eventual winners of this competition, beating Cavan’s Belturbet 2-6 to 2-5.

London’s Tir Chonaill Gaels got through to the Junior Ladies Final beating two Kerry side’s including John Mitchel’s (3-10 to 0-4) and Annascaul/Castlegregory (3-8 to 0-5).

On the other side, Ballyboden B beat Kingdom Kerry Gaels (2-5 to 2-3) and Dingle Ladies (3-6 to 3-1) on their way to the final. The final saw Ballyboden B versus Tir Chonaill Gaels which was won by the Dublin ladies by 1-6 to 1-2.

In the Junior B Shield, John Mitchel’s of Tralee lost to Laois side Clonaslee St. Manman’s (2-4 to 1-3) in the semi-final but the Laois ladies eventually lost to Kingdom Kerry Gaels 0-9 to 1-4.

Due to a late drop out, there was a straight semi-final between Cromane who barely beat a galant Dubai Celts 3-6 to  2-7. On the other side, South Kerry’s Renard beat Carlow’s Fennagh 3-13 to 0-9 And then Limerick’s Mungret St. Paul’s 3-11 to 0-12. The all Kerry Junior final between Renard and Cromane was hard fought and got heated at times, with Cromane’s Darren Houlihan at midfield to the fore along with Sean O’Sullivan upfront,  leading to a three point lead by half-time (1-4 to 0-4). Renard kept close all through with the goal between them for much of the second half but it was decided by two second half goals from Darren and then Mikey Houlihan and a love point finished by Sean Teahan to seal victory for Cromane on a scoreline 3-8 to 1-8.