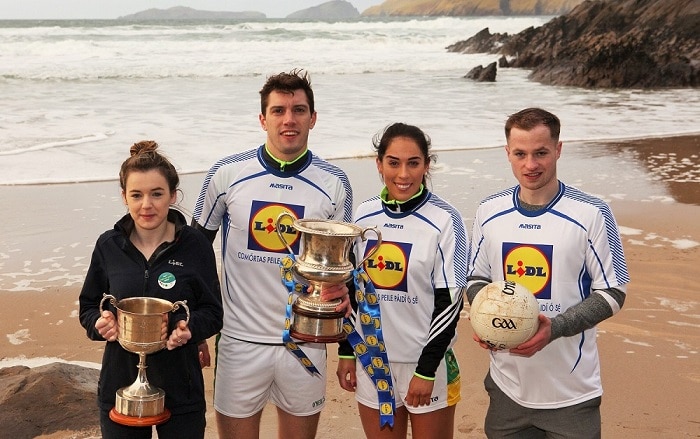 15th January: The power and appeal of one of Gaelic Football’s most favourite sons is truly evident as over 1,200 players comprising of teams from South Korea, Germany, the UK and 12 counties from the four provinces of Ireland will compete in the Lidl Comórtas Peile Páidí Ó Sé 2018, which takes place 16-18 February in West Kerry.

The famed club Gaelic football tournament and festival celebrates its 29th year which makes it one of the biggest and longest running club competitions in GAA history. 40 club teams compete in ladies and men’s senior, intermediate and junior competitions in over 20 GAA venues across the Dingle Peninsula as well as teams attending cultural and social events at Comórtas HQ, Páidí Ó Sé’s pub in Ventry, Co. Kerry.

There will be lots of familiar GAA faces popping up on and off the field over the weekend and plenty of interesting matches for Gaelic football enthusiasts at Comórtas 2018, sponsored by Lidl and supported also by Kerry County Council Tourism Unit, EJ Menswear.com and Lee Strand Milk

There is some stiff opposition in the Dermot Earley senior men’s cup with newcomers including Mayo’s Crossmolina Deel Rovers, Rosemount GAA of Westmeath, along with Clane and Johnstownbridge of Kildare.

Another Kildare side Rathangan, under the management of former Kildare All-star Karl O’Dwyer, son of the great Micko Dwyer, will line out in the intermediate men’s competition against Keel, Anascaul, Lispole as well as Tyrone’s Augher St Macartan’s and St. John’s of Sligo.

Ladies football is represented with 20 club teams competing including defending Comórtas champions Dublin’s Ballyboden St. Enda’s who are the most successful ladies club in the Dublin Championship’s history. They will be up against Brian Borus Ladies of Tipperary, Wicklow’s Bray Emmets GAA, Cavan’s Mullahoran as well as local sides Rathmore GAA featuring Kerry star Aislinn Desmond and Tralee’s Na Gaeil Ladies in the senior competition.

The UK is also well represented with John Mitchell’s Ladies of Liverpool returning to play in the junior ladies cup along with Glen Rovers of Watford and Round Towers of London.
.
The football festival, which has attracted over 15,000 club players since it began in 1989, is a big boost for tourism in the area and continues to attract huge interest.

Comórtas Chairman Pádraig Óg. Ó Sé said, ‘We are thrilled to be breaking new ground by hosting a team from South Korea and it’s great to see Team Germany ladies and men’s teams, made up of six German GAA Clubs, making the big effort to travel. It reflects the expanding reach of the GAA community globally but also shows the interest in our tournament has spread far beyond what my father ever imagined. Supermarket chain Lidl are our main partner and, just as they have helped to grow Ladies Football, they have helped us to grow the tournament to 40 teams this year which we are really excited about. The support of local host clubs is crucial in ensuring we can maintain such a high number of teams and we thank them for their co-operation. Local partners Lee Strand Milk and Kerry County Council Tourism Unit are backing us also to continue with the Comórtas, which has become a big benefit in terms of local tourism”.

Michael Collins, Lidl Ireland said ”We are delighted to continue our partnership with this year’s Comórtas Peile Páidí Ó Sé. Our sponsorship of is an extension of our commitment to Ladies Gaelic Football and our store teams in Dingle and Tralee are proud to get behind this year’s festival too.”