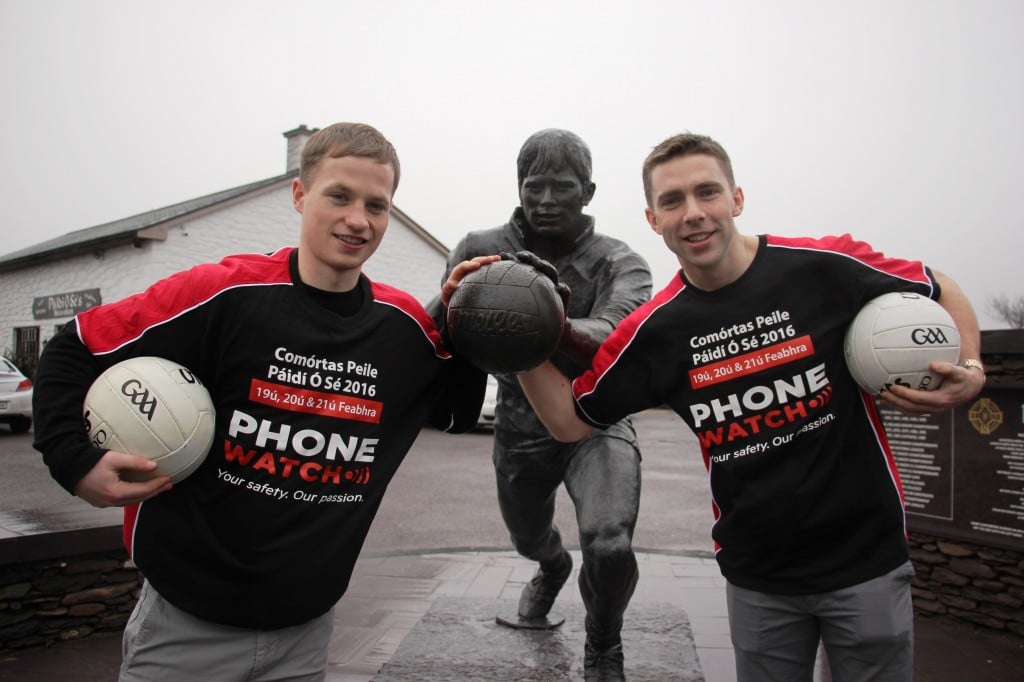 Today, 26th January: An Taoiseach Enda Kenny, TD officially launched the 27th PhoneWatch Comórtas Peile Páidí Ó Sé 2016 at an event in the Conrad Hotel, Dublin attended by a variety of personalities from the world of sport, business and politics.

13 counties are represented as part of this year’s PhoneWatch Comórtas Peile Páidí Ó Sé 2016 as well as five teams from across the UK including London’s Kingdom Kerry Gaels who are the first UK Gaelic football team ever to compete in the senior men’s competition.

Over 1,300 Gaelic football players and supporters from Ireland and abroad will compete in the 27th year of the tournament, with 36 adult men’s and ladies club teams descending on the rugged Dingle Peninsula from 19th to 21ST February.

Supported by PhoneWatch, Lee Strand Milk, Sportora, Fáilte Ireland, Kerry County Council Tourism Unit and Newstalk 106-108FM, the football festival has attracted over 12,000 club players since it began in 1989. It has grown into a major international GAA festival of football which also includes nightly music and entertainment and an annual photographic exhibition.

An Taoiseach Enda Kenny, TD commented, “The energy, attitude and love of Gaelic football that Páidí  had very definitely lives on in the Comórtas as every year we see more and more teams from at home and abroad wanting to be involved.  This tournament and indeed the life-size monument that was unveiled by his friends and family last May outside his pub in Ceann Trá will ensure the spirit of this true icon of Irish sport lives long into the future”.

Pádraig Óg. Ó Sé said, ‘We are thrilled with the enthusiasm of teams to be involved in our tournament and keep my father’s spirit alive. The Comórtas has always been about the craic and GAA camaraderie and we aim to ensure that teams, supporters and the general public won’t be disappointed. We are constantly seeing new clubs coming from across Ireland and it’s our first time seeing club teams from counties Waterford and Sligo which is great. We are grateful for the support of Ireland’s largest intruder alarm company PhoneWatch and also Fáilte Ireland, sports club communications app Sportora, Lee Strand Milk and our media partner Newstalk 106-108FM”.

Eoin Dunne, Managing Director of PhoneWatch said; “PhoneWatch are delighted to be part of the Comortas again this year.  It’s a fantastic community event and the warmth and enthusiasm for it are so visible in the organisers and all of the teams involved.  That’s the reason PhoneWatch are involved for a third year in a row’

For a programme of events and a full list of teams visit www.Paidiose.com